Biography of the artist David Ameil 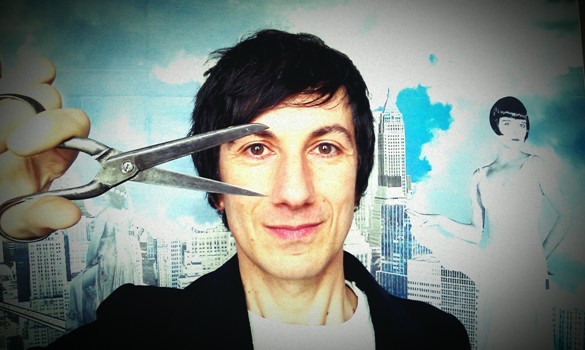 Specializing in the art of collage, David Ameil gives life to colorful world , hedonistic and offset , drawing inspiration from rock music, lifestyle and culture of surfing . And so born of his imagination "ideal" cities teeming and put in surreal scene which combines worshipers of the ocean and sophisticated creatures in an elegiac and carefree harmony.

Character and architectural fragments from eras and from very different backgrounds who, through a strange set of collision and worn in the same spirit , roam the spectrum of feelings and perceptions. Each table Ameil David is a small world in itself where a joie de vivre that this lover of the Aquitaine coast grown with insolence , brushing our dreams before tackling our fears surreptitiously emanates.
Because beyond the lightness and carelessness that emerge from its visual capharnaüms , we feel a great disappointment dawn implementation stage often with humor. Obviously , the artist likes to shuffle the cards , cultivating the absurdity and extravagance with a wealth of detail more or less esoteric - not to say Gothic - and pretense. Both retro and neo- futuristic , her most recent work demonstrated : it is in a time warp that the artist takes us to a misunderstanding on the frieze of the time.
David Ameil exhibited regularly at the international art market dedicated to surfing ( MIACS ) in Biarritz, but also in galleries in Royan , Hossegor and Lourmarin.

2017, Coup de Cœur Prize for the painting “Liberté Royan” from the City of Royan.

To be determined Shipping
0 € Total